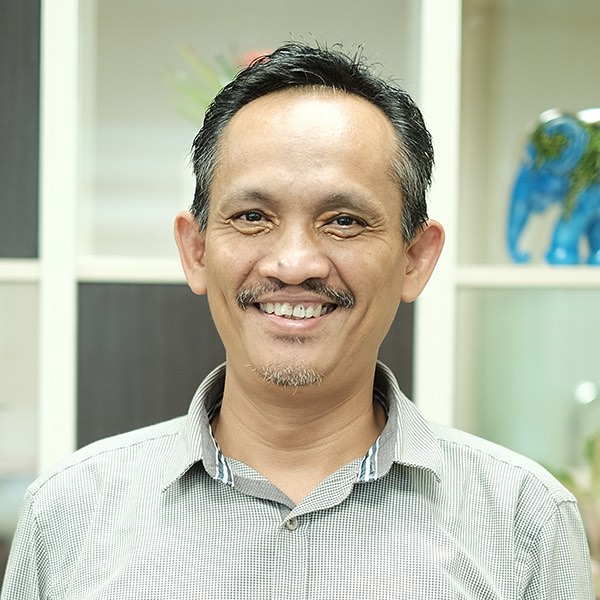 Hendaru has 30 years of experience in finance and project management projects in Indonesia in the fields of forestry and fisheries. He has experience in developing agricultural products. Hendaru specializes in building community-based companies (small companies), developing business strategies, financial systems and markets for natural resource products, especially organic products.

He has a bachelor's degree from B.S, Economic Studies and Development, Open University, Jakarta. Hendaru worked as financial staff at PT Semanggi Cemerlang Contractor in Jakarta from 1990-1991. From 1991 to 1995, he worked for Bank Rakyat Indonesia (BRI) as a teller and was promoted as an accounting staff at BRI from 1995-1997. Subsequently he was promoted as Deputy Director and Analyst of Microfinance in the 1997-1999 period.

From 1999 - 2004 he worked for the Telapak Organization as Finance Director. Telapak is an independent, membership-based organization founded in Bogor in 1995. Telapak aims to investigate destructive practices against natural resources, advocate for sound policies, and strengthen the role and participation of local communities in equitable management of natural resources.

From 2004 - 2007 Hendaru worked as a Corporate Secretary and financial director at PT Poros Nusantara Utama. He was appointed by PT Poros Nusantara West Java as Production Manager, Financial Consultant, Medical & Herbal Cooperative of West Java for Project Manager for Revenue Generating Projects. During this period, he worked together with farmer groups living in and around and Mount Halimun - Salak and Gunung Gede - Pangranggo National Parks, to develop organic agricultural products, such as coffee, cardamom and cat's whiskers (traditional herbal teas). These products have obtained organic certification from CU (Control Union)), an international certification body and have successfully exported these products to Europe.

In addition, Hendaru also encouraged cooperatives, community-based economic institutions. This experience has been replicated in several farmer groups in Indonesia.

From 2008 - 2010 Hendaru was promoted by PT Poros Nusantara Utama (PT PNU) as deputy director of finance and investment with a special task to operate PT PNU Yogyakarta. Most shares in the company are owned by the community. Together with community groups living around the Menoreh mountains, Kulon Progo, Central Java, a model of community cooperatives that was successfully built for sustainable forest management. The community cooperative has obtained a certificate from the FSC-Smart Wood (Forest Stewardship Council) for Sustainable Community Forest Management.

In 2011 he worked for the Coral Triangle Center (CTC), Denpasar-Bali as an Administration and Finance Manager (CTC is an NGO campaigning to invite humanity to save the World Coral Triangle that earns a large income in Indonesia.

From 2012-2015 he worked for the Samdhana Institute Association, Bogor Indonesia as a Finance Manager

2016-2017 Joins the Belantara Foundation, as Finance and HR Manager